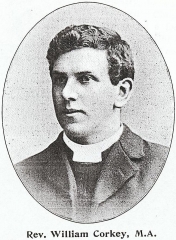 William Corkey was born in the manse at Glendermott, Londonderry on 15th June 1877, sixth son of Rev Joseph Corkey.  After passing the Matriculation examination of the Royal University of Ireland in June 1895 he entered Magee College graduating with a B.A. in Philosophy at Trinity College, Dublin in 1899.  The following year he gained an M.A., having obtained first place in both these examinations.  His theological training was undertaken at Assembly’s College, Belfast in 1900, and in New College, Edinburgh, 1901. He was installed as minister of the Cuningham Memorial Presbyterian Church on 6th December 1904 where he ministered until he received a call to Townsend Street Presbyterian Church, Belfast in 1909.

Married by special licence on 3rd January 1905 to Anna Louise Allison, daughter of the Rev. James A. Allison, the Rev William Corkey was one of the most influential Presbyterian ministers of his day.  In his autobiography, “Glad Did I Live,” he gives us many insights into the events of a long and active life.  He died on 20th February 1964.