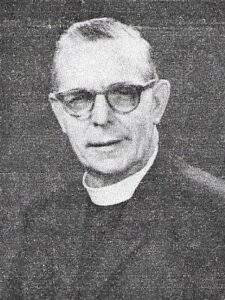 Born on the 15th April 1904 at Oakleigh, Dunminning, James was the eldest son of Alexander and Ellen Davison. One of his earliest memories was the three miles he and his family walked to church and back every Sunday.
In the early years of the Methodist church in the village James thought seriously of the ministry and he was accepted in 1930 as a candidate for the ministry overseas. James attended Edgehill Theological College, Belfast, for three years and then served part of his probation in Pettigo and Belleek. On leaving Pettigo, he went overseas in 1935 to St. Kitts in the West Indies, where he stayed about a year before moving in 1936 to the Leeward Islands, after a further two years’ probation in St. Kitts and Antigua (Freetown) he was ordained as minister in St. Kitts in 1937, having the honour of being the first missionary in the Leeward District to be ordained on the field. In 1938 he went to the British Virgin Islands where he stayed until 1945 when he came back to Ireland on furlough. During his time there, he was appointed as Manager of Methodist Schools and Supervisor of Education in this part of the Caribbean. In 1946, after his furlough he went to Dominica until 1951 where he laid plans for the rebuilding of Wesley High School, Roseau, Dominica, the only Protestant High School for Girls on the island and of which he was appointed the manager.
His skills as an organiser, builder of schools, director of education and as a pastor were now well established and in 1951 James was appointed Chairman and General Superintendent of the Leeward Islands District, and then he transferred back to Antigua. With only two short furloughs of six months each in 1952 and 1956, James shouldered the heavy responsibilities of Chairman of this vast District. In 1957 he was appointed to the then British Guiana District, again as Chairman and General Superintendent of the District. It was in this area and during an extremely difficult and dangerous period that he undertook on behalf of all the various denominations, social and philanthropic work for which he was to receive recognition beyond the confines of his own denomination. After returning from furlough in 1963 he was appointed Chairman of the Relief Committee of the Christian Social Council of British Guiana. During a strike which began on the 20th April 1963 and lasted for eighty days in British Guiana in 1963 he organised the relief work of the Christian Social Council, which included the feeding of some twelve thousand needy children every day throughout the country. He carried on this relief work during the troubles in this country in 1964 while at the same time played what was no small part in bringing peace to a troubled community. It was in recognition of his services to education and social relief work that he was awarded the O.B.E. in 1964 and he received this honour at Government House, Georgetown, British Guiana.
He continued as Chairman of the District until 1966 having completed thirty-two years’ service overseas, returning to work in Ireland. During his furlough in 1966 he assisted, at the request of Conference, in the work of Church Extension, and in 1967 was appointed to the circuit at Aughnacloy, and Monaghan from 1969 before moving to the circuit of Coleraine, Portrush and Portstewart district in 1972.
James was called to the highest office in the Methodist church, becoming President of the Methodist Church in Ireland in 1970. He was chairman of the Portadown District in 1970-71.
The Reverend Davison, who, throughout his life retained a deep affection for the singing of the Psalms and Paraphrases, and who “looked upon the world as his parish”, passed away suddenly on the 15th November 1972 in the Belfast Recorder’s Court of a heart attack while waiting to give evidence. A memorial service was held in the Cullybackey Methodist Church on Sunday 26th November 1972 after which he was laid to rest in Killymurris Presbyterian Church Graveyard.