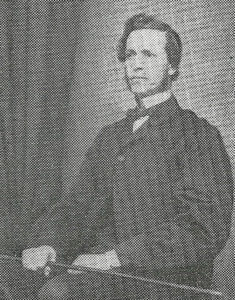 Mr William Craig taught in the National School, Cullybackey, from 1853 until 1868 before he and his wife, who was the principle of the Cullybackey Female School from 1853 left for America where Mr Craig was taking up a post as an Inspector of Schools.

Mr Craig also taught the “writing” school which was set up for those who were too big or too busy to attend the day school.  This from six o’clock until nine o’clock on Monday nd Thursday evenings.  The principal subjects were reading, writing, and arithmetic and as extras “anything you liked.”  Although nine o’clock was the normal time of closing Mr Craig was never in a hurry to get away.
He not only taught the boys’ school and the writing school but he was a very active role in the local church activities.  He was a Precentor, Sabbath School Superintendent, Bible Class leader, secretary of the Sunday School Teachers’ Union and was partly responsible for the planning of the new schoolroom which was built in 1865 and stood so long on the “Shillin Hill.”  He was also an active worker during the 1859 Revival and was capable to taking the Sunday services if the minister was indisposed.

Before he left a number of his friends met in the new school rooms and presented him with addresses and testimonials.  The Rev. G. R. Buick read an address from the Presbyterian congregation of Cullybackey, warmly acknowledging the great services rendered by Mr Craig in the congregation and neighbourhood during a period of fifteen years, as well as presenting him with a purse containing fifty sovereigns.

A deputation, representing the teachers of the district and some other friends in the neighbourhood of Ballymena, also read an address to Mr Craig, referring to his great exertions in the cause of education, and they presented him with a gold watch and chain, with the inscription:-“This watch and chain was presented to Mr W. Craig, Cullybackey, by a number of his friends, chiefly teachers, as a slight token of their estimation of his character and worth.  June 1868.”  Mr Craig was also presented with a handsome dressing case by Mr A. Lavender, Raceview, and an elegantly bound Bible and pocket-book by the pupils of his school.

His stay in America seems to have been short lived as he took up a the post of headmaster in the Ballymoney Model School on 4th July 1871.  He only stayed here for a short time before going to Newtownards Model School.  After retiring in 1895 he went to live in Bangor, County Down where he resided until his death on 10th February 1897 and was laid to rest in the Old Abbey Churchyard.