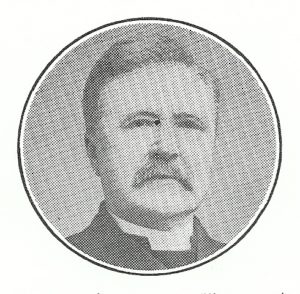 Mr Samuel Lyle Orr, who had previously taught in Tullybane, near Cloughmills, came to Cullybackeyin 1879 but left in 1880. Born on 13th March 1847, his early life was spent in the ordinary occupation of a farmer’s son, but apparently he had no ambition to be a farmer, for in a little poetical autobiography he wrote:-
My parents packed a bag with books
And hied me off to school,
I was so good the rod was spared,
So smart I swallowed all I heard.
And so my mind on learning ran,
I loved it dearly, too,
Along with that I did all work
That farmers have to do.
And many a day from dawn till dark
I helped my father at his work;
I was a man of twenty-three
When farming I resigned,
And choose another course in life
More suited to my mind.

During this short time his genial manner, along with many other good qualities made him very popular. During his time in Cullybackey he was one of a small band who contributed much to the church and social life of the village. When he left Cullybackey he returned for a time to his old school in Tullybane before going to college to study for the ministry taking his theological course at Magee College, Londonderry and being duly licensed by the Presbytery of Route on 7th May 1889.
Mr Orr was ordained in Second Monaghan (Ballyalbany) Presbyterian Church on 13th August 1889 and remained there until 20th March 1906 when he cast in his lot with the Free Church of Scotland. When he left here is unknown. His first charge under the Free Church was Milton Congregation, Glasgow. Here he remained for about nine years before going to Saltcoats in Ayrshire in 1915, until failing health compelled him to resign on 1st January 1926.
Not only was Mr Orr a successful teacher and minister, he was also a gifted writer. For many years as “Sam Route” he portrayed in graphic language in “The Irish Presbyterian” and other papers sketches of County Antrim and Scottish peasant life as he knew it. He also wrote a very popular children’s column using the name “Uncle Orr” in a monthly religious journal called,“The Instructor.”

Even when an old man, his love of writing, like his interest in Cullybackey, was a solace and comfort to him. At the time of his death he was contributing to his favourite journal in a series of,“Peeps through Grandfather’s Window,” the premier place being given to a story in which the scene is laid in the Cullybackey and Hillmount of about a hundred years previously. He speaks about the introduction of the linen industry, which had converted the “clachan of a dozen or so miserable dwelling into a village with many dozens of respectable homes.” Naturally the schoolhouse came in for some attention as well.
After a long, busy and useful life, Rev Orr passed away in his sleep at his son’s residence in Belfast on 13th January 1930.