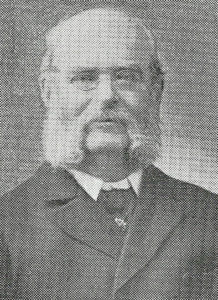 Mr John Browne only stayed for a short time in Cullybackey. He was a man of the noblest character, of superior education and considerable literary ability. John Montgomery Browne was born on 24th November 1828, the son of Robert Brown of Clatteringford, near Comber, County Down and was the ninth generation of his family in Ulster. While in Cullybackey Mr Browne stayed at Waterbank, Drumrankin, with a Mr John Kernohan, and these two gentlemen could often be seen together driving along with a horse and cart. The friendship begun in Cullybackey between these two men lasted all their lives.
On leaving Cullybackey he went to Guy’s School, Ballymena and from there to Dublin for training. Mr Browne was a man of too large ambition to settle down quietly to the lifelong humdrum existence of a National School teacher. In his early days he wrote articles to the papers and wrote the book, “A Compendium of Geography”, written for the National Board of Education.
He used to recount with pleasure articles he published urging the desirability of throwing open the inspectorate to all comers by competitive examination which resulted soon afterwards in this becoming an accomplished fact. At this time he was headmaster of Newry Model School to which he had been promoted from Bailie Borough Model School on 8th July 1861. It is characteristic of his ability and industry that when he himself entered for the examination for the inspectorship, he passed with 1,000 marks ahead of the next competitor. It must have been a gruelling test as he was ten days under examination in Dublin Castle. He left the hall thinking he had failed, but the examiners were of another opinion, for his letter of appointment dated 8th January 1864 reached him immediately afterwards.
During his lifetime Mr Browne received many tokens of esteem from those whom he came into contact in the educational world. He was fond of chemistry and used to give lectures on this subject. He was also a classical scholar and was particularly fond of Virgil and Homer.
Mr Browne died in 1913 and although his stay in Cullybackey was too brief to have left much of an impression behind, it is good to remember that someone who had such a distinguished career got some of his experience in our local seat of learning.