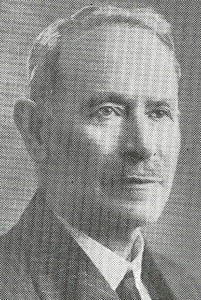 James McGavock, a native of Carnlough, came to Cullybackey with a good record. He had been a pupil teacher in Sligo Model School, and assistant teacher in Guy’s Boys’ School, Ballymena. From Guy’s he went to Dublin for training, and, after completion of the course was called up to the College as training assistant for one year. Professor J. J. Doherty, in giving McGavock a testimonial wrote, “Mr James McGavock so distinguished himself during his course of training that he was selected by the professors for the important post of training assistant.”
From Dublin he came to Cullybackey. In 1903 he was awarded the “blue ribbon of the teaching profession,” the Carlisle and Black premium, and, later promoted to first of first grade for efficiency in school work.
Mr McGavock also proved himself a popular figure at local concerts, where his services were in much demand and freely given. As Mr McGavock resided for many years in Ballymena, he did not come so closely into contact with the church’s activities or with the social life of the village as some of his predecessors had done, and perhaps for that reason his work did not leave so deep an impression as others. He was, however, connected with the Cuningham Memorial Church for most of the time he taught in Cullybackey and he organised the first part choir in the village, and trained and led it for seven years in the public services of the church.
During his time as principal,he saw the erection in 1901 of the new buildings, which became known as the Buick Memorial Public Elementary Schools. His period of service in Cullybackey, which began on 1st October 1890, and ended with his resignation on 30th June 1928, extended over a much longer period than that of any former principal.
On his retirement on pension, Mr McGavock went to live in Belfast.