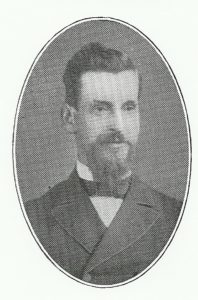 James Logan was born in Moneysharvin, near Upperlands, and taught in Limavady before coming to Cullybackey in 1870. He was a strong-featured man with a goatee beard and a keen sense of discipline. He was very successful as a teacher in Cullybackey, or as is written in the book,“Cullybackey Sketches,” “He hammered it in.” Not only did Mr Logan teach the useful and practical programme of a national school of those days, he also taught an extensive course in Latin, mathematics and general science, well maintaining the superior position Cullybackey School had attained under his predecessors.
Aside from teaching during the day, Mr Logan also taught afternoon and evening classes. Subjects being taught were Acoustics and Light and Heat on Monday and Thursday afternoons from three to four pm. Animal Physiology on Tuesday and Friday afternoons and Agriculture on Monday and Thursday evenings from seven to eight pm.
Mr Logan, was all his life a devoted Presbyterian and while in Cullybackey took an active part in the work of the local congregation and in the activities of the Cullybackey Sunday School.
He remained here until 1879 when he went to Dominick Street Schools, Dublin, in connection with Ormond Quay Presbyterian Church, and was also superintendent of the afternoon Sunday School. Here he worked until some years later when Mr Logan was appointed a receiver under the Bankruptcy Court, Dublin and gave up teaching for good.
After going to Dublin he lived for many years at Skerries, and for the last ten years of his life he lived in Donaghy House, near Cookstown. Mr Logan’s hobby was fishing, but he did not appear to have any of the literary learnings of some of his fellows, for he had no university degree and there is no record of him having written any articles or books or being a member of any scientific society.
After being confined to his room for several months, due to extreme weakness, he died on the 24th February 1924 aged eighty-two.