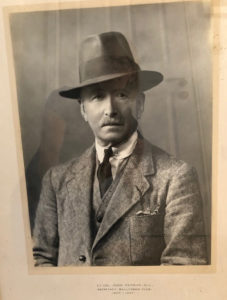 Eldest son of the late Mr John Patrick, J.P., Dunminning, Lieutenant-Colonel John Patrick was one of the most popular gentlemen in County Antrim and for twenty-seven years was president of the County Antrim Agricultural Association and chairman of the Executive Committee since its inception in 1900, an organisation in which he took a very keen interest and did much to further its interests.  He was chairman of the Antrim County Council, and other chairmanships he held in connection with the County Council were of the Proposal Committee, the County Committee of Agriculture and Board of Management Greenmount Agriculture College.

As chairman of the County Council he was an excellent head and was held in high esteem by all its members.  He took a very personal interest in all its workings and as he was a practical farmer himself his interest in that industry was manifested on many occasions at the annual distribution of prizes at the Greenmount Agricultural College, Muckamore.

He was also a member of the County Antrim Library Committee and did much good work in extending its influence throughout the length and breadth of the county.  He was appointed to the magisterial Bench shortly after the death of his father, but owing to his many other commitments he was not a frequent attender at the local petty sessions courts.

In his early days he was Master of the Mid-Antrim Hunt, and later acted as judge at their point-to-point meeting at Galgorm.  He was also a member of the County Antrim Grand Jury and was appointed a Deputy Lieutenant for the County.

As a young man he served as a Captain in the Royal Garrison Artillery, better known in those days as the Carrick Militia.  On the outbreak of war in 1914 he offered his services to his country and was appointed officer in charge of the Remount Department at Ballymena, and was afterwards appointed an officer in connection with the Army Ordnance Department at Carrickfergus, retiring with the rank of Lieutenant-Colonel.

Lieutenant-Colonel Patrick was a devoted member of the Craigs Parish Church and in politics he was a strong Unionist, but took little or no part in the political life of the community. He was survived by his son, Captain John Patrick, M.C., who was formerly a Staff Officer with the Command in Northern Ireland and on the staff of the War Office in London, and by his daughter, who was the wife of Captain Roger Moore, D.I., R.U.C., Omagh, son of the Right Hon. Lord Chief Justice Moore, of Moore Lodge, Kilrea.  His wife had pre-deceased him.He was also survived by his brother Mr Malcolm Patrick, locomotive superintendent, L.M.S. (N.C.C.) Railway.