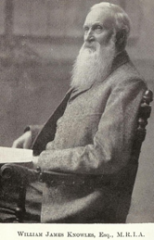 William James Knowles was born at Fenagh near Cullybackey on 29th January 1832.  As a young man he was interested in botany, geology and archaeology and his writings on these subjects are numerous.   Educated privately and after becoming qualified to teach these subjects under the Science and Art Department, he held classes in Cullybackey, Portglenone and Ballymena, teaching such other diverse subjects as magnetism and electricity, heat and light and the principles of agriculture.  He founded the Ballymena Archaeological Society and in 1875 he formed the Ballymena Naturalists’ Field Club, he was a Fellow and active member of the Royal Society of Antiquaries, Ireland, holding the position of vice-president from 1897 to 1900, a Fellow of the Royal Anthropological Institute, London and a member of the Royal Irish Academy and the Belfast Naturalists’ Field Club.

He became Mid-Antrim’s most prolific writer on antiquarian matters publishing in his lifetime over seventy papers in journals and was described as the “Father of Ulster Antiquaries.” He had an extensive library and had a collection of over 32,000 specimens of geological and archaeological interest with many being extremely rare and valuable.

In November 1924 his large collection of antiquities was auctioned at Sotheby’s of London. He died in 1927, aged 96 at Ballycastle, and is buried at the Craigs, a short distance from Cullybackey. Although largely unknown or forgotten by many of today’s archaeologists, his contribution to our understanding of Irish prehistory was enormous; William James Knowles was a truly remarkable man.