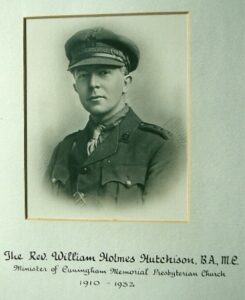 William Holmes Hutchinson was born on the 21st January 1878, the middle child of James Hutchinson, Esq., of Rathmines, Dublin and Henrietta Hutchinson, nee Holmes. He received his early education in Dublin before the family came to Belfast. William studied at Queen’s College, Belfast graduating in 1904 with a B.A. from the Royal University of Ireland.
Following a short career in business with the firm of Gregg and Phenix William felt the call to the ministry. On completion of his Divinity course at Assembly’s College, Belfast, William was licensed as a probationer for the Christian Ministry by the Presbytery of Belfast on the 26th May 1908, after which he was assigned as an assistant minister in Fisherwick Presbyterian Church, Belfast.
A call to the Cuningham Memorial Presbyterian Church in Cullybackey came after two years as the assistant in Fisherwick Presbyterian Church, where he was installed as its eighth minister on the 5th May 1910. Only four short years after his installation the First World War broke out, but in 1916, after the great number of casualties at the Battle of the Somme the Rev. William Hutchinson made the decision to enlist in the army. Although initially he was a despatch rider, his desire was to be an Army Chaplain and in November 1916 he made an application for an appointment as a Temporary Commission in the Regular Army. On the 1st February 1917 he was discharged from his duties with the Army Service Corps, Mechanical Transport Division, No. 2 Mobilization Company to take up the role as an Army Chaplain, continuing to work in the same Battalion.
He knew the dangers and risks of battle in the front line as he was gassed on the 14th August 1918, returning to duty on the 23rd August and he was wounded with a gun-shot to his right arm on the 20th October 1918, returning to duty on the 26th October 1918. For his bravery in the face of enemy attack the Rev Hutchinson received the Military Cross for actions during the final advance in Flanders. As well as receiving the Military Cross, he was awarded the British War Medal and the Victory Medal and he is listed in the honours list of the 36th Ulster Division.
The Rev Hutchinson returned to the Cuningham Memorial after he was formally demobilised on the 30th June 1919 where he remained until 1932 when he accepted a call to Ballywillan Presbyterian Church, Portrush, where he was installed on the 26th May 1932.
It was while he was minister at Ballywillan that he married his wife, Dr. Isobel Alexander on the 20th July 1938, the eldest daughter of Mr and Mrs Robert Alexander of Crossreagh House, Portrush,. They had one son, who sadly died in infancy.
Later in life he joined the Royal British Legion taking an active interest in its work. The Rev William Holmes Hutchinson passed away on the 24th August 1953, aged seventy-five. At his funeral on Wednesday 26th August 1953 his coffin was draped with the Union Flag and the standard of the Portrush Branch of the Royal British Legion. The Rev Hutchinson was laid to rest at St. John’s Church of Ireland Churchyard, Islandmagee.