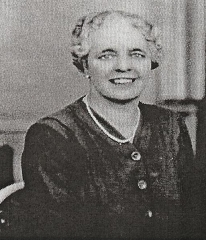 Originally from Londonderry and a graduate in medicine from Queen’s University, Belfast, she was the first woman to be appointed as a house surgeon in the Londonderry City and County Infirmary in 1922.  Later she had experience in the Royal Victoria Hospital and the Rotunda Hospital, Dublin.  She came to live in Cullybackey when her husband the Reverend Samuel McIlveen was ordained as minister in the Cuningham Memorial Presbyterian Church in November 1932.

Besides taking a keen interest in congregational activities, particularly the Women’s Missionary Association of which she was president, Mrs McIlveen served the wider community for many years on various committees including the Galgorm Division on the Ballymena Rural Council, the Board of Guardians until they were abolished in 1948, Ballymena Regional Education Committee, Waveney Hospital Committee and the County Antrim Library Committee.  She was also the founder, past president and fellow member of Cullybackey Women’s Institute.

Mrs McIlveen passed away on 21st May 1955 after a long illness.  Tributes were paid firstly for her public service, which, coupled with the loving service she gave to her church and the wonderful help she had given to her husband, made her an outstanding personality.  For her selfless and untiring devotion to her work for the village and its people, the full extent would never be realised and for the improvements such as water and sewerage schemes and the housing estate Ard-Na-Maine.  None of these things would have come to reality without the tireless efforts of this wonderful personality who by passing through this way had left Cullybackey much richer in every way.