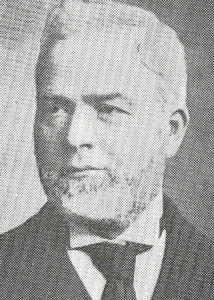 Mr John Smyth, was a native of Galgorm and had been a pupil teacher in Ballymena under Mr Given.From 1876 until the autumn of 1878 when he was appointed as assistant master in Kilkenny Model School he was assistant to Mr Logan in Cullybackey. He remained in Kilkenny until the autumn of 1880, when he returned to Cullybackey as principal, staying here until the end of 1885, when he joined the inspection service and his official connection with Cullybackey ceased.
It was said that no more able man or better teacher has at any time guided the educational destines of the youth of the Cullybackey district. Mr Smyth was a man of the highest character, a hard worker and he insisted that all those who came under his care should also work hard.
The three R’s, reading, writing and arithmetic were thoroughly taught, but the school curriculum was not confined to the three R’s. There was music, drawing, algebra, grammar and spelling. English composition, geography, book-keeping and agriculture, some of these which would at that time have been useful in a farming and commercial community.
Cullybackey School in Mr Smyth’s time reached high-water mark as a kind of finishing academy for the more ambitious scholars of the smaller school in a wide area, of which Cullybackey was the centre. Each winter these boys and girls came, who if they learned little else would at least carry away with them some idea of the value of time, as Mr Smyth was a believer in the wisdom of giving, “to each flying minute something to keep in store.” Tolerating no wastage of the precious hours.
There were evening classes in connection with the Science and Art Department, South Kensington, which flourished under his care giving all who were interested an opportunity of acquiring a knowledge of natural, physical and mathematical science altogether outside the scope of an ordinary national school.
It gives you some idea of the width of Mr Smyth’s reading and the extent of his knowledge, as during his five years here he taught eleven different subjects, generally taking four subjects each year. In 1880-1 he had classes in mathematics, geology and animal physiology; in 1881-2 inorganic chemistry and mathematics. In 1882-3 he taught theoretical mechanics, physical geography, sound, light and heat and inorganic chemistry, in 1883-4 mathematics, animal physiology, principles of agriculture, magnetism and electricity and in 1884-5 elementary botany, mechanics, geology and hygiene.
The religious education of the young was also well looked after. Half an hour each morning was given to the Scripture lesson and under the stimulus of the yearly prizes given by Mr Young, keen competition was evoked, so keen on some occasions that the winning of a first prize in the Shorter Catechism, meant the absolutely correct repetition of the whole 107 questions.
When the day came for Mr Smyth to take leave of his pupils he read a passage from the 12th and 13th chapters of the Gospel of John, “Little children, yet a little while I am with you… A new commandment I give unto you that you love one another as I have loved you, that ye also love one another.” It was felt he could scarcely have given a more tender or more appropriate farewell.
Whilst in Cullybackey, Mr Smyth identified himself with the work of the Cuningham Memorial Church, acting as secretary of committee from 25th October 1882. At his last attendance on 12th December 1885, a resolution was adopted and entered in the minutes expressing the committee’s indebtedness for, “the thoroughly efficient way in which he had discharged his duties of secretary, and wishing him all possible happiness and success in his new sphere of life.”
This new sphere of life was to lead to nearly thirty-six years as a school inspector where he worked in every county in Ireland, except Donegal, Fermanagh and Longford.
All his life, Mr Smyth was a hard working student, gaining a B. A. in 1893 and a Master of Arts of Royal University Ireland in 1899 and a Bachelor of Laws of the National University of Ireland in 1911.