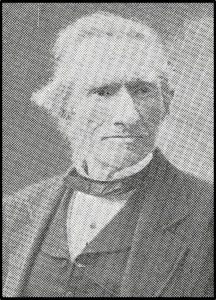 Mr John Given was the first teacher to leave his mark on the educational life of Cullybackey. According to the headstone which indicates his last resting place in the Reformed Presbyterian churchyard he was born on the 1st January 1813 and died on 27th February 1883. For the most part he was a self-educated man, and threw himself into the work of teaching about 1840 with a zeal and heartiness which proved that it was to him a “labour of love.”
In the absence of definite records it is somewhat difficult to fix the exact period of Mr Given’s stay in Cullybackey but it is thought to have been about eight years. Someone who was associated with him at this time wrote, “A fine man, and I greatly admired him then and always.” Another writer of his day refers to him as a man of uncommon ability and uncommon character. He was described by a former pupil in Cullybackey as of medium height, habitually wearing a “scoopy” cap and chiefly remarkable amongst the juniors for the length and redness of his nose.
In Mr Given’s day, corporal punishment was the usual method by which teachers enforced discipline, but Mr Given was able to work the school without it. He put all the mischievous boys by themselves in a class which he called the “disobedient class,” and put this class by turn in the charge of one of the pupil teachers.
Mr Given was not only a capable teacher within the walls of the village school, he was also an enthusiastic student of nature, and took his senior pupils on Saturday afternoons on outing or long rambles in the country, sometimes as far as Glenariff, and in encouraging them to make careful notes of what they saw he endeavoured to do something of the work that was popular with field clubs and kindred societies of the time. He was also a believer in the saying that travel broadens the mind as he took trips to the Highlands of Scotland, Killarney and to Dublin and Bray, no mean adventure in those days of slow and comfortless travel. When the actual journey was not possible either to himself or his pupils he took them on imaginary travels into strange lands, teaching his geography.
Mr Given left Cullybackey to take up the post of principal at the Ballymena Model School in May 1849 and his age was given as 36. While he was teaching in Ballymena it was his habit to go out before school hours for the morning paper, the pupils playing about until his return, which was usually heralded by the warning note, given by one of the pupil teachers, “I think I see his nose.”
A report in the Ballymena Observer dated 8th July 1875 written by the Rev R. W. Rowan, Mount Davys tells us that John Given had tendered his resignation owing to ill health. He retired on a pension from Ballymena Model where he taught for more than a quarter of a century.
It was the custom of teachers in those days to take an active role in public life, Mr Given was no exception. He acted as secretary of committee and took an active part in the work of the congregation of Cullybackey, then ministered to by the Rev Hugh Hamilton.
Upon retirement from teaching he took an active part in the proceedings of the Ballymena Presbyterian Association for the session 1878-79 and recording them in a little book, “Pleasant Peeps into Presbyterian Pastures,” which was published in 1880.
As was fitting when the end came on 27th February 1883, he returned to make his final resting place in that graveyard he knew and had described so well, where his father, mother, brothers and sisters slept the sleep which knows no breaking.