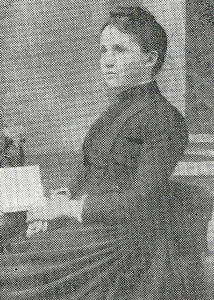 Miss Leetch spent all her life in the village and was brought up under the teaching of Mr and Mrs Craig. She was first a monitress in Cullybackey, and afterwards went for a time to the Ballymena Model School. She returned to Cullybackey about 1870 as assistant to Mrs Logan, and when Mrs Logan left she was promoted to the principal ship of the girls’ school, a position which she retained with great success until 1910, when she retired and was succeeded by Miss Annie Gore.
For forty years Miss Leetch guided the educational life of the young girls of the neighbourhood, striving to make them work as she worked, and to fire them with her own ambition to excel. Miss Leetch followed the careers of her former pupils with a kindly regard and was always pleased to hear of their success. Such was her standing as a teacher that in a newspaper report from the “Ballymena Observer” dated the 23rd April 1887 on the Public Examination and Distribution of Prizes it states that,“Miss Leetch stands in the highest rank of National teachers, deserves the greatest praise for the creditable and satisfactory state of her school, as it ranks amongst the first in this district, and has always been one of the foremost schools in the North.”
From an early age she was a devoted member of the Cullybackey congregation and was for many years a teacher in both the morning and evening Sabbath Schools. She was a member of the Church Committee, being elected onto this committee in 1919 and took a full role in its deliberations. She was also secretary to the Women’s Association for Foreign Missions in connection with the congregation.
In her will dated 1st March 1928 she bequeathed £50 to provide the yearly rent of a pew in the church to be known as the manse pew and £50 to provide a yearly income for the benefit of the scholars of the Sabbath School. Margaret died on 4th March 1930 and was buried in the Pound Graveyard.