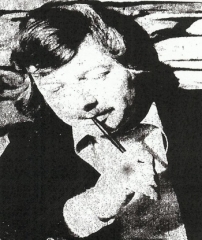 Born on 7th November 1941 in Moylarg, Dromona, near Cullybackey, Ian’s writing was encouraged and developed at Tullygrawley Public Elementary School by his headmaster, the late R.L. Russell.  Leaving school at the age of fourteen he took a job in a textiles factory for about a year, before going to work in a garage, then moving to Belfast.  After a short time in Belfast he decided at the age of eighteen to move to London and found himself as a student studying musical instrument technology.

Always interested in writing and after having written a few short stories and signing a contract with the publishers “Faber and Faber” to write more short stories he changed his job to become a writer of books instead of short stories.  His first novel A Streak of Madness was published when Ian was thirty-two and acclaimed as, “the creation of an extraordinarily gifted artist.”  His novel “Gone In The Head,” (1975) was runner-up for the 1974 Guardian Fiction Prize.  Five more books were to be published before his death at his London home on 9th September 2004.