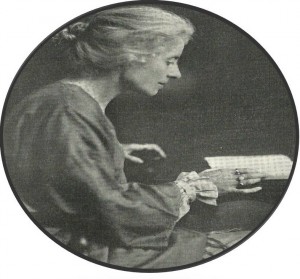 Eldest child of James Bristow Young and his wife Matilda, nee Russell, Ella, or Ellen as stated on her birth certificate was born in the townland of Fenagh on 26th December 1867. Ella’s parents were married in the Cullybackey Reformed Presbyterian Church on 10th August 1866. Ella was born into a middle-class, staunch Unionist, Presbyterian family. The Young family moved house a number of times during Ella’s youth, before settling in 57 Grosvenor Square, Dublin. After moving there Ella became a friend and protégé of Irish nationalist and writer, George William Russell who also resided in Grosvenor Square.

Ella attended Alexandra College at Earlsfort Terrace in Dublin’s City and later graduated with a B.A. Degree in law and political science from the Royal University of Ireland. During her student years Ella became a member of the Theosophical Society whose members engaged in the comparative study of religion, science and philosophy and the practice of self-realisation.

She became deeply immersed in the study of Irish history, nationalism and the struggle for Irish independence. Her political views were decidedly Republican and she supported the Volunteers at the Easter Rising. After the Rising she left Dublin to avoid possible arrest as her rebel activities had attracted the attention of British intelligence. She stayed in Waterford and in Achill Island of the Mayo coast. When her friend Countess Markievicz was released from prison in June of 1917 she joined Cumann na mBan, returning to Dublin in 1919 and resumed her rebel activities, hiding arms and ammunition.

Disillusioned with what Ella saw as the division of her beloved Ireland she decided to take up an invitation from New York Times journalist Alden Jewell who had met Ella while on a visit to Ireland. He knew of her reputation as a story teller and promised to arrange for the best agents in the country to promote her and to book lecture tours for her along America’s East Coast and possibly beyond. Her lecture tour finally culminated in Ella taking up a post lecturing on Celtic Mythology at the University of California, at Berkeley.

Over the years Ella had written a number of books especially for children on Celtic Mythology. Retiring in the late 1930’s she moved to Halcyon, near Oceano in California. She bought a little cottage close to the beach and the dunes which she called “Cluan Ard.” It was here that she completed her autobiography, “Flowering Dusk: Things Remembered Accurately and Inaccurately.”

Diagnosed with stomach cancer and refusing any medical treatment Ella passed away peacefully at her cottage on the 23rd July 1956. Her ashes were scattered among the Red Wood Trees but there is also a burial plot in her memory in the Santa Maria Cemetery in California.