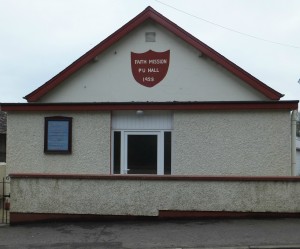 In 1915, a mission was conducted in Cullybackey YMCA Hall, Main Street, by two Faith Mission pilgrims, Misses Mosley and Evans.  During the Mission a large number of people were blessed and at the close, a weekly prayer meeting – the Prayer Union was formed to help and encourage the young converts.

Later, Mr Alex Kerr, a Belfast evangelist held a mission in the Cuningham Lecture Hall, and many converts from this mission went to the Prayer Union.  In view of large attendances, the present Faith Mission Prayer Union Hall was built and opened in 1928.

The Prayer Union has leaders or representatives in charge of the work and the first of these was Mr Tom Sanderson and part of his report entitled, “Blessed Times In Our New Hall,” dated March 1929 states:-

“I should like to voice the note of praise and thanksgiving to the Lord that is felt in the hearts of the members of the Cullybackey Prayer Union.  We can say, “The Lord has done great things for us, whereof we are glad.”  We praise him for the way He has led in the building of a much needed P.U. Hall; for His coming in blessed power on the opening day; and for a real consciousness of HIs presence with us since then.”