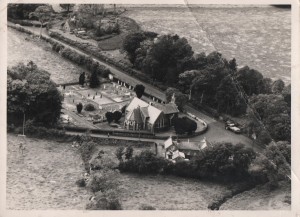 CRAIGS PARISH CHURCH
On a corner which once was a barren, rocky area where cock fights took place on an Easter Monday and goats ran free sits the Craigs Parish Church opposite the Craigs Parochial School.  Prior to the building of the parish church it was in the schoolhouse that the first recorded service was held at 2 o’clock in the afternoon on Sunday 14th December 1837.  The Rev George Kirkpatrick, curate of Ahoghill, officiated.  The preacher’s book records that it was a wet and stormy day and 55 adults and 20 children attended.  Services were held once a month, then later once every Sunday.

Designed by Charles Lanyon, (later Sir) building commenced in the Spring of 1840 at a cost of £760.12s.5d. and consecrated  just over a year later by Bishop Mant on Wednesday 14th July 1841.  Built of black stone with ashlar trim the church consisted of a nave and a small chancel, with a porch and vestry.  The Rev George Kirkpatrick, descended from a Scottish family and born in Dublin in 1798 was the first rector and served the parish until 1868 when he was succeeded by his son Rev Alexander Thomas Kirkpatrick.

In 1870 the church was further enhanced with the erection of two transepts and south aisle under the supervision of the architect Mr Thomas Drew (later Sir.) An organ was installed in 1879 and in 1888 the beautiful sanctuary with its apsidal ending was erected in memory of six infant children of Mr and Mrs Edmund McNeill of Craigdun.

Time has mellowed the outward appearance and inward gracefulness of the Craigs Parish Church but still today it is one of the most picturesquely situated and attractive churches in our area.

When the organ was installed in Craigs Parish Church in 1879, it must have been the subject of much interest and discussion in the district. At that time the only churches in the area which possessed a pipe organ were the Moravian Church in Gracehill and St. Colmanell’s in Ahoghill. Almost seventy years were to elapse before a pipe organ was installed in Cuningham Memorial Presbyterian Church, Cullybackey.

The organ was the gift of Edmund McNeill and his wife Mary, of Craigdun Castle. A brass plate (now lost or misplaced) on the organ reads, “Presented to the Congregation of Craigs Church by Edmund McNeill and Mary his wife November 13th, 1879.” It may have been brought from a private chapel in County Killarney. The instrument was built с1850 in Soho, London, in a yard mentioned in “A Tale of Two Cities” by Charles Dickens. In chapter six, entitled Hundreds of People, we read:-

The quiet lodgings of Doctor Manette were in a quiet street corner not far from Soho Square… The Doctor occupied two floors of a large still house, where several callings purported to be pursued by day, but whereof little was audible any day, and which was shunned by all of them at night. In a building at the back, attainable by a courtyard where a palm tree rustled its green leaves, church organs claimed to be made…

Although it bears the name “Telford and Telford, Dublin,” the organ was built by Henry Bevington of Manette Street, Soho, (the old name was Rose yard). This was a very old established firm which for one hundred and seventy years occupied these premises, and it was the practice to send small organs to other builders who attached their own labels.

The organ is an unremarkable example of its period and the specification is as follows:-

An octave of pedal pull-down was available for the bottom octave of the keyboard.

On 27th October, 1879 it was recorded, “that in consequence of a friend of the congregation having presented the church with an organ, it is advisable to take down the gallery which obstructs light from the west window and make some other small alterations in the arrangement of the church. Resolved that the best thanks be and they are hereby given to Edmund McNeill, Esq., for his liberal gift in providing an organ for the use of the church.”

On the 19th December, 1879 a special service was held for the opening of the new organ, details of which were reported in the Ballymena Observer, 27th December 1879:-

THE CHURCH OF IRELAND

CRAIGS PARISH CHURCH – On Friday, a special service was held in the above church, at twelve o’clock, for the purpose of opening a new organ, which is the gift of Mr. and Mrs. Edmund McNeill, of Craigdun. It was built by Messrs, Telford, of Dublin, and has been pronounced by competent judges to be a superior and sweet-toned instrument. The officiating clergymen were the Rev. George Kirkpatrick (the former rector, who resides in the parish and who still continues to take an active part in the parochial work); the Rev. Alexander T. Kirkpatrick, the present rector; and the Rev. Robert Hanna, D.D., vicar of Belfast. The latter gentleman preached an impressive sermon, taking as his text St. Mark xiii, 12, after which a collection was made for the choir fund. The singing was led by a choir consisting chiefly of some of the Sunday-school teachers and scholars, whose training in church music has been much benefited by the kind attention of Miss McNeill, who played the organ on the opening day. The fitting up of the organ has been made the occasion of introducing some other alterations in the interior of the church, which, when completed, will considerably improve the general appearance. The cost of these has been much undertaken by Edmund McNeill, Esq., J.P., Mrs. Patrick of Dunminning, and other parishioners. In these improvements are included two handsome chairs for the chancel, presented by John Patrick, Esq., J.P., of Gledheather, and two large service books for the communion table, the gift of the Rev. George Kirkpatrick. Among those who attended the service on Friday were several friends from other parishes and congregations, who testified a kind interest by their presence on the occasion.

The Minute Book of Vestry Meetings records that on the 9th March, 1880, it was, “Resolved that the churchwardens be requested to effect an insurance on the organ to the extent of £80.

In 1888 the present chancel was built and the recess on the north side was incorporated in the design to accommodate the organ. It was placed there, but this position does not appear to have been a satisfactory one, for in 1915 it was placed in its present (possibly its original) position. There it remained, unmolested, except for regular tunings, until 1951 when an electric blower was provided in memory of Mrs Edith Townsend, the wife of a former rector. Until this time the wind supply had been provided by a boy sitting on a stool at the side of the organ and pumping air into the bellows, always making sure that a small lead weight behind a little glass window was kept below a certain mark. Evenness of tone and pitch depended on a competent organ blower, who, if he was skilled, could perform the operation almost silently.

In 1965 it was decided to have the organ rebuilt and on the recommendation of Lord Dunleath, Noel Mander, who was also entrusted with rebuilding many famous instruments including the one in St. Paul’s Cathedral, was given the job. When the organ had been dismantled and transported to London, Mr Mander decided to make some, to my mind, unfortunate, alterations. He removed the pedal board, which meant that the full sound of the organ is difficult to achieve. The organ was limited, but a resourceful organist could, with the pedals, add interest by playing the melody line of a hymn at a higher octave; he could solo the tenor line at a higher octave; he could perform some simple chorale preludes and other genuine organ music by modifying the pedal part to suit the restricted compass of the short pedal board. Now all these possibilities were no more. In addition he disposed of the old organ case and put the instrument into a modern case, quite out of keeping with the Victorian period. The destruction of the old case removes not only an interesting example of Victorian craftsmanship, complete with candle sconces and some quite intricate carving, but also a valuable piece of social history – the names of many organ blowers etched on the side of the organ during moments of relaxation or boredom during the services. The show pipes were re-gilded in plain gold, removing the green leaves and white flowers which had previously adorned them.

Fortunately the basic sound remains, as far as I can tell, the same as before and the organ continues to be used each Sunday for the services in this beautiful little church.