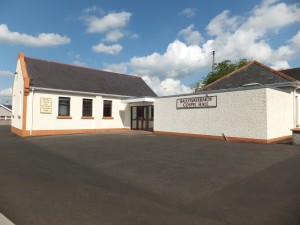 A small number of people, including some women, met  in William Baird’s kitchen on Sunday’s to remember the Lord and on Wednesday evening’s for prayer and bible study.  As numbers grew they moved to various barns in the vicinity.  Following some tent meetings in a field kindly granted by Mr Patrick Wiseman, he made it known that he would be willing to lease this plot of ground for the building of a hall, the rent being five shillings per year.

A wooden hall was erected in 1888 with its gable towards the road.  On the gable was a porch with the entrance door on the right hand side.  Inscribed on the end of the porch was the text from First John Chapter 4 verse 10, “Herein is love, not that we loved God, but that He loved us, and sent His Son to be the propitiation for our sins.”

As the lease was coming to an end the plot was offered to the brethren for purchase at a cost of £50 which was gladly accepted.  On the 2nd January 1936 the plot of approximately nine perches was registered and became freehold, trustees were appointed with a declaration of trust drawn up and signed.

For fifty years this wooden hall was the home of the assembly, but with the woodworm also making its home there for years it was decided in 1938 to build a new hall on the same site.  While the new hall was being built, Mr Matthew Fulton kindly granted the assembly one of his barns in which to hold their meetings.  The new hall, built by James and Robert McMillen was opened in April 1939.

With more people in the 1950s being able to afford cars some land adjacent to the hall was offered free of charge for a car park which facilitated about fifteen cars, a bicycle shed with toilets was also added.  In 1957 the decision was taken to install electricity in the hall and set aside the Tilley lamps.

By 1976 the existing car park was getting too small and ground was purchased in September of that year.  A hedge was removed and a wall was built in its place and a new entrance made at the side of the hall.  The car park was again extended in 1984 to facilitate the growing number of people now with vehicles, with the last extension to the car park in 1987.

In 1978 it was decided to build an extension, incorporating a new entrance into the hall and a tank for baptisms was also built with the first baptism taking place on 24th May 1978.  Another event of note was the first wedding to take place in the hall on 21st June 1979 as the hall had been registered for marriages on 27th February 1979.

From humble beginnings in William Baird’s kitchen where five or six met with the promise, “Where two or three are gathered together in My name, there am I in the midst of them” the assembly at Ballywatermoy Gospel Hall has flourished, remembering always that the building is not the Church, it is only the place where the Church meets, the Church being the company of people.

With thanks to Mr Bobby Carson for information supplied.